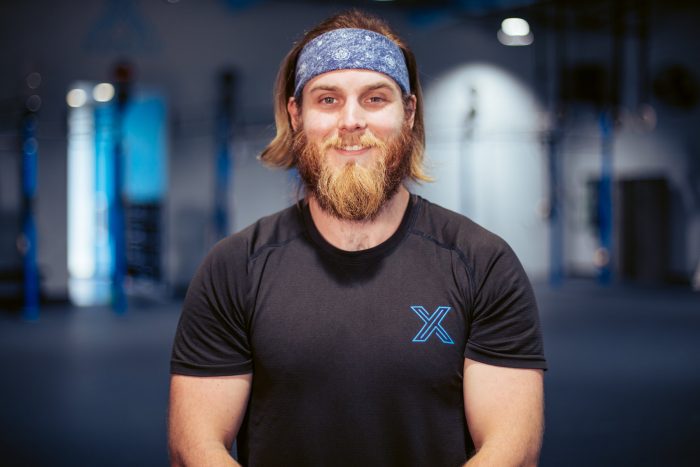 Jake has been with Nexus Fitness for a little over a month and has already been a great addition to our coaching team.

Jake started CrossFit in 2010 after being inspired by his mom and two sisters, who had been doing CrossFit for several years before him. Once they convinced him to try it out, it wasn’t long before he was hooked and working out become something he looked forward to every day.

Throughout college, Jake coached CrossFit and even switched his major from business to exercise science, so he could pursue a career in the fitness industry. He also had the opportunity to work for two years as a strength and conditioning intern at the University of Alabama, working with athletes across several sports. He has been coaching full-time since he graduated from UA in 2014.

Jake’s favorite workouts are ones with technical lifts, gymnastics and mono-structural movements all-in-one because those are the most challenging. He believes well-rounded athletes are able to be efficient in a workout involving all three of those types of movements. For individual movements, Jake prefers snatches and strict pull-ups.

Athletes participating in Jake’s class should expect to come in prepared to work hard every day, but to also have fun and enjoy the hour you spend with him. He wants his athletes to spend their time in his classes bettering themselves – not focusing on any stressors outside the gym.

As far as Jake’s coaching style goes, he prioritizes mechanics and consistency on any movement. Once an athlete shows efficiency in those areas, he’ll encourage them to add intensity to the movement by either speed or loading.

“I like to get to know everyone that I coach on a personal level, because I have learned over the years that people respond to all different types of encouragement and coaching.” Jake said, “By getting to know each individual athlete, I am able to best coach the athletes in a way to set them up for success in the gym.”

Jake brings positive energy to each class he coaches, as well as a great eye for detail.

“Sometimes it’s very simple cues or coaching points that can make all the difference for an athlete,” Jake explained.

When it comes to music in Jake’s classes, you will hear a wide variety of everything from classic rock to hip-hop. His favorite music to listen to is indie rock and folk rock…but he doesn’t play that too often for classes.

Outside of coaching classes, Jake enjoys hanging out with his family at home or going to concerts and music festivals with them. You can find him doing anything that is active – he’ll play any and all sports and games. One thing you might not know about him is that he’s a huge fan of sci-fi movies and video games!

Make sure to try one of Jake’s classes at Nexus Fitness and get to know him as your CrossFit coach!