Many members at Nexus Fitness know Jake King as the man behind the madness. When there is a tough workout, one you really enjoy or one that taught you a new movement, you can thank Jake. Not only is Jake a CrossFit and X⁴ coach at Nexus, but he also programs all of the workouts not only for Nexus but all X⁴ affiliates across the country! Get to know a little bit more about Jake and the method to his madness as we take a deep dive into his programming!

Tell us a little bit about yourself. Some members might not know you personally so introduce yourself, how you became a coach and how you came to work at Nexus Fitness/how you learned to program workouts.

For those that do not know me, I am Jake King. I am originally from Gadsden, Alabama but now call Birmingham home. I have been coaching for the last 10 years! I started coaching when I was 18 as a part-time gig while in college. Coaching and fitness quickly became more than just a hobby for me as I switched my major during my first year and graduated with a bachelor’s in exercise science. I spent the majority of my undergrad coaching everything from CrossFit classes, strength and conditioning classes, and weightlifting classes. During my time at the University of Alabama, I was fortunate enough to work for two years as a strength and conditioning intern with Alabama Athletics. I had the privilege to work with football, softball, golf, soccer, and cheer during my time as an intern. The combination of my undergraduate studies, four years of coaching experience, and my two-year internship gave me a well rounded and extensive base that I feel helped set me up for success in the fitness world.

Describe yourself as a coach and what your goal is for each class that you coach. When did you first start programming at Nexus Fitness? What is your favorite part of programming?

As a coach my goal is simple. Positively impact the day of our members each time they come to Nexus Fitness in some capacity. Whether it’s getting to know each person individually and asking about their life and how things are going, all the way to making sure members get the most out of their workout each day. While I’m not always as selfless as I would like to be in everyday life, once I put the coach hat on, I find myself 100% dedicated to those in the class.

As far as how I came to work at Nexus, that’s where a young Ben Powell comes into the picture. After I graduated from Alabama in 2014, I stayed in Tuscaloosa and took a full-time position at CrossFit RTR as the head coach. I spent three years working there, Ben was just in high school at the time. He had a few years of CrossFit experience under his belt and showed a ton of potential as a coach. We brought him on as a part-time coach when he was just 17! To make a long story short, Ben ended up taking a job at Nexus and then a few months later I got a call from Chris and Ben with the opportunity to come on board as well! The call came at the perfect time as I had recently moved back to Gadsden and wasn’t entirely sure what my next step in life was going to be. (Fun fact: Had I not got the call I was most likely going to pack my bag and move to New Zealand.) 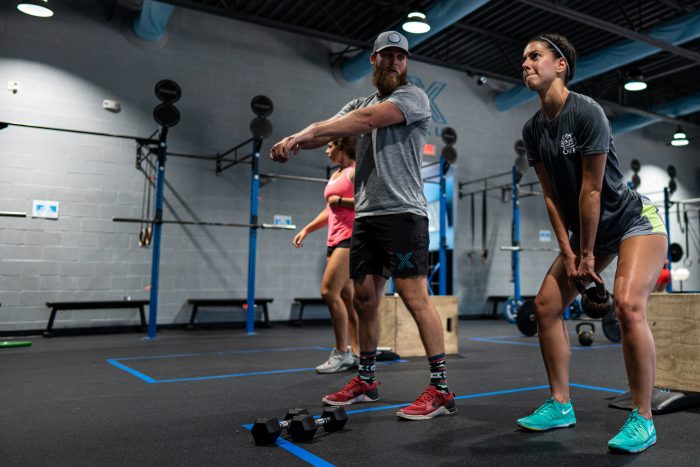 I started programming CrossFit alongside Ben a few months after I started at Nexus in June of 2018. I shifted into the X⁴ programming role in August of last year. Programming is my art form. While I was in college I would program workouts in the margins of all my notebooks during classes for myself or others to try. My notebooks were filled with hundreds of workouts I created. Needless to say, I have been really passionate about writing workouts and program design for a long time – almost eight years now!

What is your strategy for programming CrossFit and X⁴? How do you gauge the right level of intensity, keeping workouts tough but actually completable? How has your programming evolved since you first started planning workouts?

I could probably host a three-hour lecture on this topic, but I will do my best to answer in a paragraph! My strategy for programming CrossFit and X⁴ is simple, yet complex at the same time. First, at Nexus, both the CrossFit and X⁴ classes are GPP (general physical preparedness) programs. GPP focuses on the overall balance of the different aspects of fitness without getting too specific into one area of training. When it comes to programming, I focus on movement type (push, pull, hinge, squat etc.), energy systems utilized (intended stimulus for the workout), along with any other areas needed to build a well-rounded program, such as mobility or hypertrophy/accessory work for imbalances.

I think some of the most important areas of a program, especially for the general population, are variety and enjoyment. You could have the most effective workout program in the world, but if your members don’t enjoy them they ultimately won’t do them. That is probably my favorite part of programming, creating workouts day in and day out that have purpose but also don’t get monotonous.

Do you feel that X⁴ members are able to try a CrossFit class and the CrossFit members are ready to try an X⁴ class at any point based on your programming? What would you say to someone who is interested in trying the other side of the gym?

The awesome thing about the dynamic between CrossFit and X⁴ at Nexus, is that while the two programs differ a good bit in the overall intensities, we utilize the same movement patterns and energy systems on both sides. We squat, press, push, pull, hinge, do high volume, low volume, sprint, recover and push mentally and physically all the same. So if you are on one side or the other I encourage you to try out “the other side.” After all, we are one big Nexus community so you might as well see what the other side has to offer and meet some of the awesome members that make up both programs!

When you coach, what is your favorite music to play?

I play a mixture of new/older rap, upbeat pop/EDM, as well as the occasional Katy Perry or 90’s grunge alt. to mix things up. My own personal workout music is indie rock/indie pop though.

What is the most satisfying part of coaching a CrossFit and X⁴  class?

The most satisfying part of coaching classes at Nexus is seeing members choose to come day in and day out to better themselves. This has been a crazy year and I know members’ lives are hectic with family, kids, work, stressors, and life in general. I don’t want people to lose sight that they need to take care of themselves, not just others. Life is about balance. After all, if you’re not willing to take care of yourself, who will? 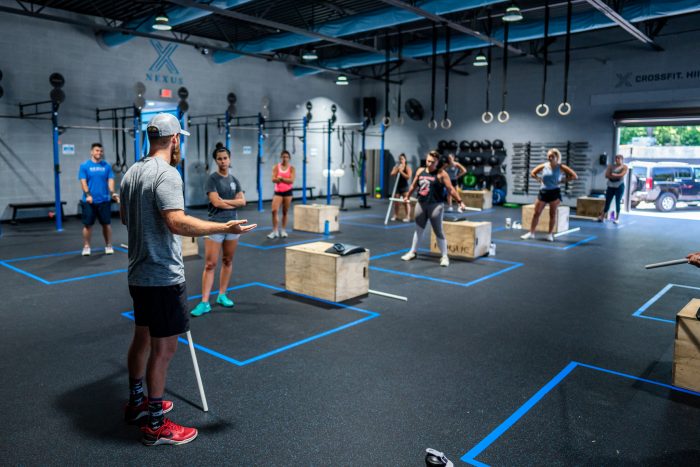